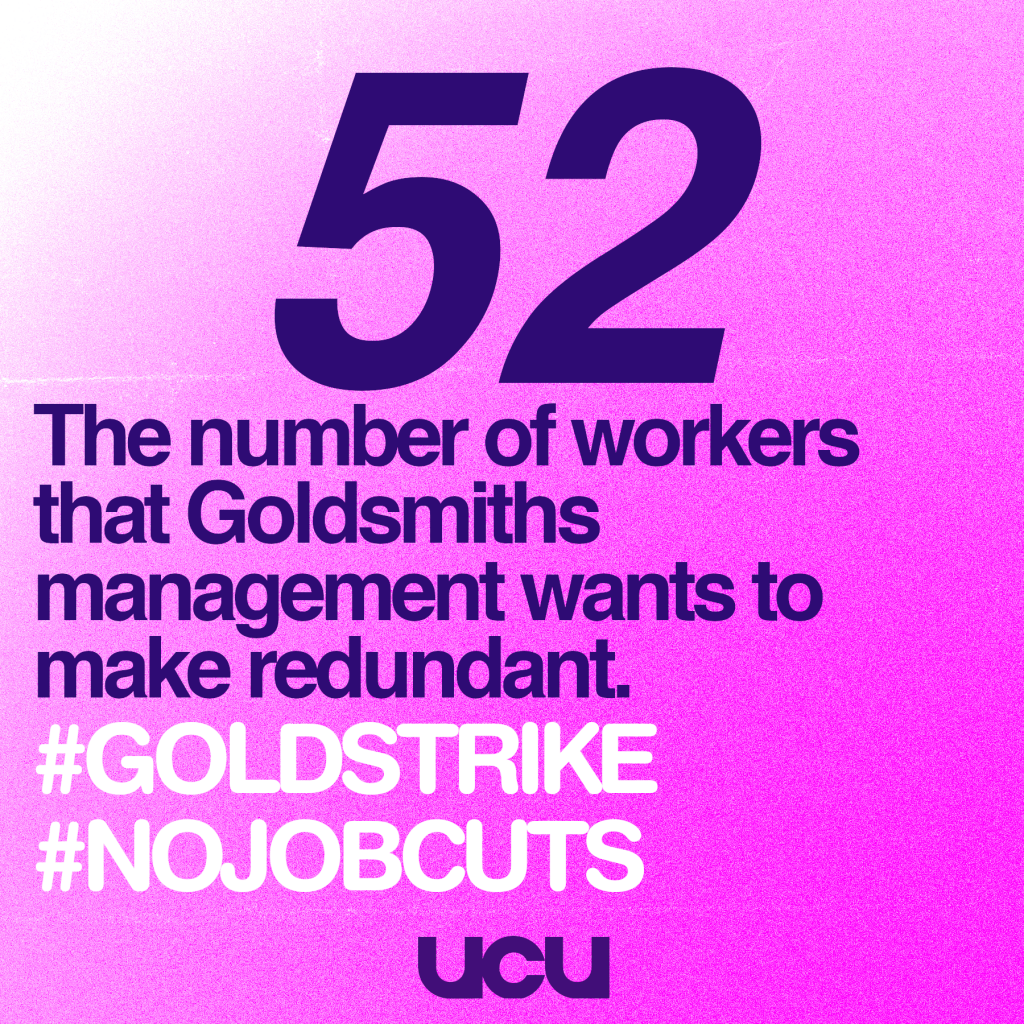 This open letter summarises the contents of a longer letter sent by Goldsmiths UCU and Goldsmiths Unison, with the support of Goldsmiths Student Union. The two major staff unions and student union have come together to express their concern at the lack of accountability currently being shown by SMT over the proposed redundancies and restructure. We believe these plans represent a direct threat to the college’s long term viability and future. Our concerns are threefold:

We are concerned that Council has not been provided with information regarding the supposed financial necessity of the proposed redundancies. Our analysis of the finance reforecast shows, and this has been confirmed by the CFO in negotiation meetings, that the College finances do not necessitate the level of job cuts proposed. We are also concerned that there have been no risk assessments carried out on the planned redundancies by SMT and the significant risk that they will harm the longer-term strategic interests of the college has not been factored into any planning decisions. Our position is that the redundancies are not necessary in the short-term to meet the terms of the covenants, and will damage the College’s ability to generate income in the medium to long term. The redundancies should therefore be taken off the table.

Over the period of collective consultation, significant problems have emerged with the restructure. Our analysis, and that carried out by a number of departments, has shown that the restructure of professional services will harm student facing services, and have a significant impact on the ability of the college to attract students and generate income in the future. Furthermore, the original ‘cost-savings’ presented in the OBCs were inaccurate. The model proposed for future staffing (‘to be’) involves a reduction of only 2.3 FTE. It has also emerged that the ‘cost-savings’ associated with the restructure will not be made through ‘efficiencies’ but through downgrading of posts. According to the College’s own staff data, this downgrading will have a disproportionate impact on women and staff of colour (76% of administrative staff in departments identify as women), and SMT have informed us that no mitigation measures have been carried out that would constitute ‘due regard’ under the Public Sector Equality duty.

Finally, there have been significant legal issues with the way that the redundancy process has been carried out to date and major questions remain outstanding. University policies on managing organisational change, equality and diversity have not been followed. SMT have absented themselves from a majority of consultation meetings to date, and sufficient information has not been presented to staff or unions. Most concerning of all, SMT are now refusing to arrange any further dispute resolution meetings with the recognised trade unions. It is the position of both unions that we are happy to go to ACAS, however, we have asked that SMT commit first to zero redundancies, and a halt to the restructure so that the significant problems around downgrading, equalities and workload can be addressed. We remain committed to dispute resolution meetings and in fact offered one on Friday 26th November which SMT refused to attend. It is a gross abdication of responsibility on the part of SMT to refuse to negotiate in good faith with the trade unions during a period of extensive strike action. GUCU has informed SMT that if they continue to refuse to negotiate, we will be left with no choice but to carry out further industrial action next term.

We believe that the current crisis constitutes an emergency, and we therefore call on Council to meet with Trade Union representatives this week in order to come to a resolution of the dispute.