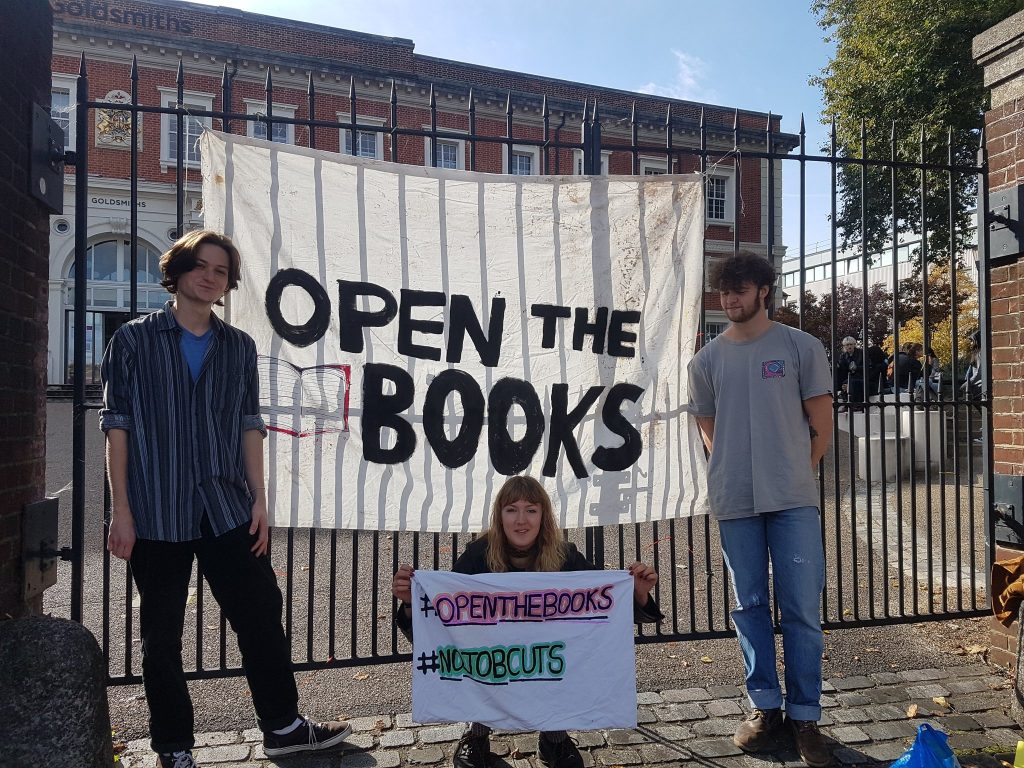 You will have received an email from Goldsmiths Warden, Frances Corner, about possible industrial action at Goldsmiths this term.

The Warden distorts some things in her email, and misses out others, so we wanted to write to you to highlight five things you need to know about the dispute over redundancies at Goldsmiths  – things that Frances Corner didn’t tell you.

Frances Corner’s senior management team (SMT) has informed us that it plans to cut 52 jobs this year: 20 academics in English & Creative Writing and History, and 32 professional services staff. The survival of courses in the departments of History and English and Creative Writing are in serious jeopardy, and the professional services cuts (to staff in timetabling, student support and other areas) risk causing chaos and harming student experience.

Despite the Warden’s claims to the contrary, SMT’s plans do involve a form of fire-and-rehire. Professional services staff were sent an email telling them their role was to be “deleted”; these workers will now have to apply for a smaller number of jobs, often on lower pay, within a centralised admin department. What is this if not fire-and-rehire?

The redundancies management seeks to make would reduce our ability to grow income from tuition fees and research, possibly requiring us to make further job cuts in future. Goldsmiths doesn’t have to shed staff; if we refocus on growth we can protect jobs and get rid of the deficit. Student numbers are growing after the pandemic and are projected to grow further. Rather than spend millions on corporate consultants, management needs to develop a strategy for growth that reduces the deficit without wrecking the College’s reputation and getting rid of our biggest income-generating asset: staff. You can read our analysis of Frances Corner’s disastrous financial strategy here.

The Warden makes a lot of the fact management supposedly works with or “consults” the unions. Sadly this is not the case. The job cuts were in fact decided upon long before any staff were consulted, or even told. The redundancies were offered to the banks Lloyds and NatWest, who then made these cuts a condition for loans given to the University. Management announced its plans for a “restructure” of professional services and cuts to academic departments via all-staff email, long before unions were consulted. Now management is refusing to let us know the terms of its secretive deal with the banks – if they are so keen on consulting and working with staff and students, why won’t they #OpenTheBooks so we can see what discussions are happening about the future of the University? Oh and in terms of Goldsmiths respecting its workers – did you see this story about the University treating teachers like Uber treats its drivers? Management only decided to give short course tutors workers’ rights after they were forced to by a legal challenge. Hardly a pro-worker management.

It is true that industrial action would cause disruption for everyone, but the simplest way for this dispute to be solved is by management making a guarantee of no compulsory redundancies and agreeing to work with us to come up with a fairer, more sustainable way to reduce the College’s deficit. GUCU is ready to talk, but so far management has not listened to our demands.

If Frances Corner is serious about trying to get the best for students, then why doesn’t she take steps to end this dispute now?

For more information about the planned redundancies and industrial action, including what students can do to help fight job cuts and end this dispute, visit our resources for students page.