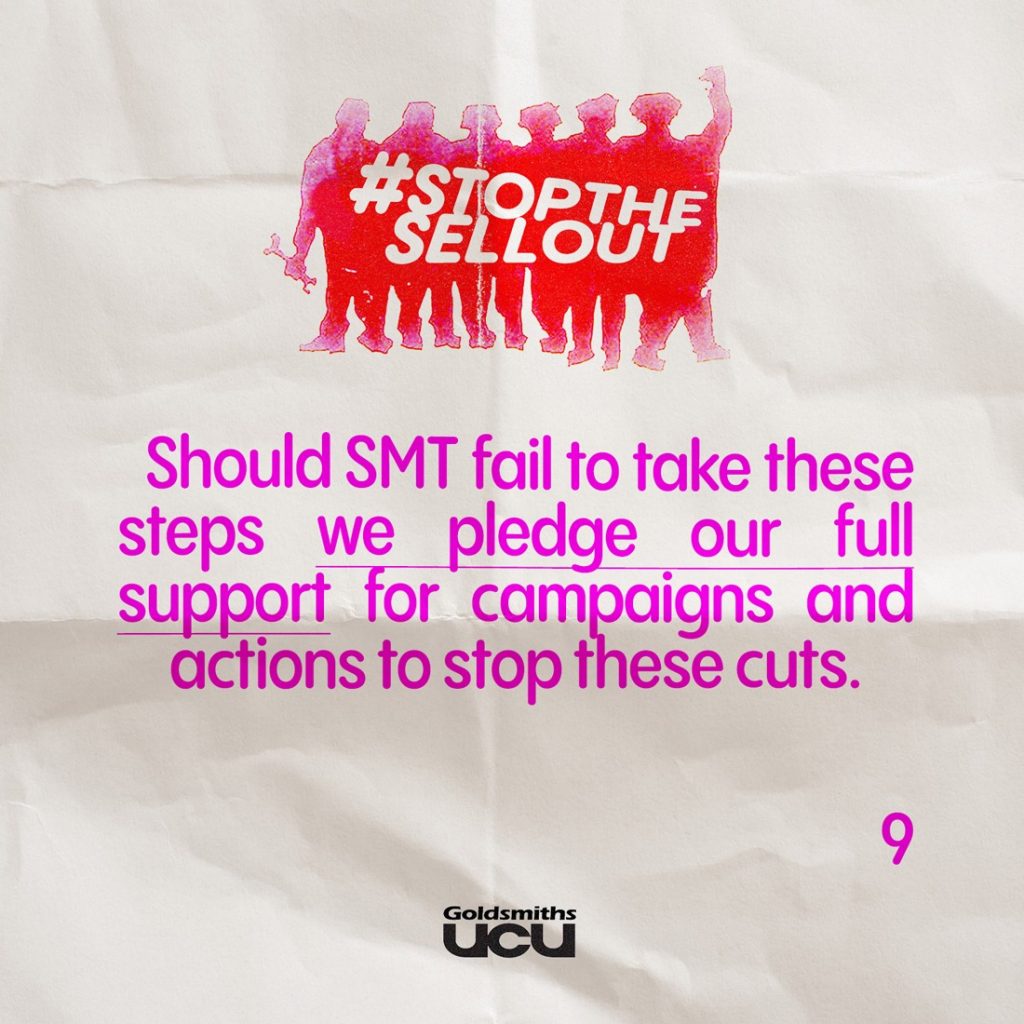 Goldsmiths senior management team (SMT) has issued the campus unions with two legal documents (called Section 188 notices) stating that it plans to make redundant 32 professional services staff and 20 (full time equivalent) academics in English & Creative Writing and History. Under management’s proposals, these 52 staff would be issued redundancy confirmation letters before Christmas and leave post at the end of February 2022.

If these cuts were to be carried out, they would cause administrative chaos, undermine Goldsmiths’ critical humanities provision, and do little to put the College on a secure financial footing.

GUCU officers continue to attend regular meetings with SMT, but management has so far failed to meet our demands for a guarantee of no compulsory redundancies, for an alternative plan to reduce the College’s deficit, and for full transparency on College finances including over the terms of management’s deals with the banks. The threat of industrial action will give GUCU negotiators significant leverage to press our demands. At numerous branch meetings, GUCU members have voted in large numbers to reject these cuts and show their support for taking industrial action in the event it is needed. The threat of industrial action is a vital component of any campaign against redundancies.

These cuts are the first round of a sustained campaign of cuts, imposed by the agreement between SMT and the banks, over the coming years. We need to oppose this round, or be in a much weaker position further down the line.

SMT is hoping that confusion and uncertainty around these redundancies will prevent members from taking action before it’s too late. According to SMT’s plans, the first redundancy notices would be issued in November 2021. We need to act now if we want to stop these devastating cuts.

There is a deficit, but management’s plans will make matters worse by harming student experience, reducing fees income and causing significant reputational damage. There are clear alternatives to cuts. GUCU has debunked SMT’s case for cuts over growth here.

These cuts are not inevitable. UCU branches at Liverpool and at Chester managed to defeat management plans for redundancies through a combination of industrial action and other campaigning. GUCU was able to pause management plans for mass redundancies through our assessment boycott last year, and we were a key part of the campaign to defeat Evolving Goldsmiths in 2019.

GUCU officers ask you to vote YES for each of the three options on the ballot paper. It is important to keep all options open, including action short of strike action, an assessment boycott and full strike. An explanation of these different options can be read here [change to link on GUCU website]. The fight against these redundancies may last months and it is important to retain the option to take different forms of action at different points during the academic year. In the event of a YES vote, there will be further meetings before any action is taken and members will be able to input into the strategy.

This is the most extensive set of redundancies ever proposed by Goldsmiths SMT. If they are carried out, students will have a more difficult time accessing support, courses may be cut, the quality of teaching will drop, and remaining staff will be even more pressed than we already are in supporting our students. At the same time, pressure to increase recruitment will continue. If these redundancies go through, our students will be hit hard too. That is why Goldsmiths Student Union joins us in opposing these planned redundancies.

At the same time, it is crucial to recognise that our students have already experienced a tremendous amount of disruption to their education and their lives, due to the pandemic and years of mismanagement and conflict at Goldsmiths. It is important that we all make a concerted effort to speak to our students about what is going on and listen to their concerns. GUCU has a working group committed to building solidarity and networks of support between students and staff, and works closely with the Students’ Union. Everyone is encouraged to get involved in this work, and take initiative to mitigate the impact on students and get involved in working together on the issues that matter most to them, on their terms.