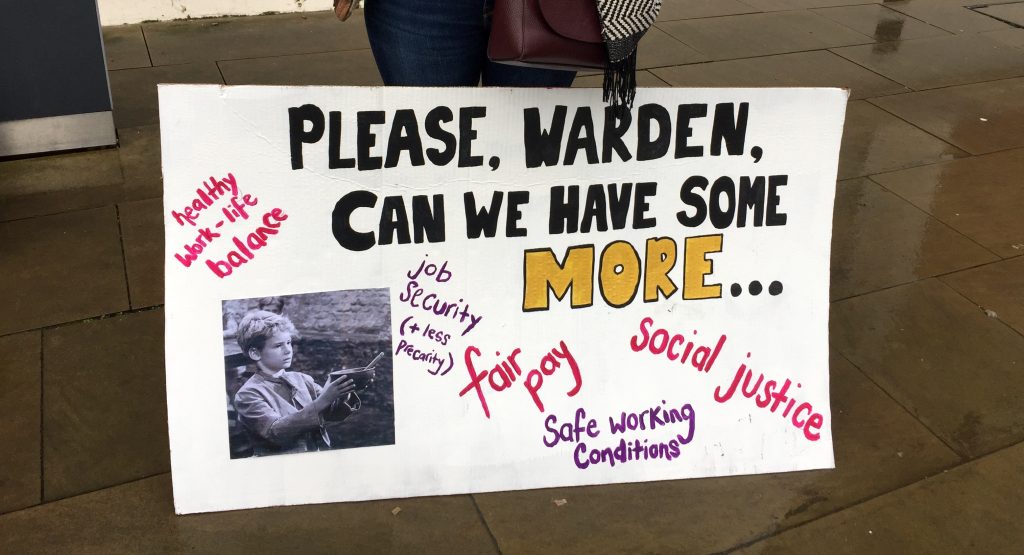 Frances Corner was appointed the new Warden (Vice Chancellor) of Goldsmiths in 2019, and in a matter of months declared a financial crisis and a re-structure entitled ‘Evolving Goldsmiths’. This ill-conceived, market-driven and deeply divisive restructure came as a surprise, not least because someone who is a self-declared feminist had failed to carry out adequate gender or race equality assessments of the cuts proposed, but also because until 2019, Goldsmiths had been managing fine financially, despite marketisation reforms of 2010.

Those who were critical of Frances Corner’s management are sometimes accused of bad feminism for critiquing a woman leader, but Goldsmiths students had something important to say about this in February 2020. When the new Warden invited herself to introduce a session at The Arc of Advocacy event celebrating the work of renowned feminist and human rights law Helena Baroness Kennedy QC, students took the opportunity to disrupt her speech and declared that ‘Frances Corner is not your feminist hero!’. They called the audience and wider publics’ attention to the implications of her ‘Evolving Goldsmiths’ re-structure on an already existing BME and gender pay gap and her co-optation of radical politics.

So was Goldsmiths the financially ‘failing institution’ Frances Corner declared it to be when she took up her post in April 2019? In 2019-20 there were signs of some overspending on building, and a rather over-ambitious intake target, against which money had been spent. But two independent auditors, including KPMG in 2020, concluded that Goldsmiths’ operations had been cash generative, that the College had run surpluses until 2019 and had grown so-called ‘market share’ despite competition from the Russell Group since 2010. In three months, Frances Corner had gone from being the leader of a robust and thriving institution to one she continues to think of and respond to as a failure.

How else can we think about Frances Corner’s leadership through the lens of gender? In recent years the business press and entrepreneurial communities have become captivated by the idea of the ‘Glass Cliff’ as a metaphor for female leadership in times of crisis. The ‘Glass Cliff’ is described as a phenomenon whereby women and other minority group members are over-represented in leadership roles that are risky and precarious. That women, in other words, are ‘set up to fail’. It might be tempting, in Frances Corner’s case, to think this too – that she is a victim of this ‘Glass Cliff’, especially as she herself talks persistently about the institution she leads, as one in crisis. Indeed, those who feel it is bad feminism or unfeminist to critique a woman leader because she is a woman may well be thinking in this way.

But while the ‘Glass Cliff’ might hold true in FTSE 100 companies, aside from the obvious point that the University are not commercial enterprises, thinking about any female leader as a ‘victim’ of her circumstances or as ‘set up to fail’, devoids them of their agency. It takes responsibility away from those female leaders who make damaging decisions in times of a crisis, or indeed, who propagate narratives of crisis to strong evidence of the contrary.

Frances Corner is no victim of a ‘Glass Cliff’, nor was the institution she leads in great trouble before she arrived. The Warden has created her very own ‘Glass Cliff’. Instead of dealing responsibly with an emerging, and manageable deficit in 2020, she initiated a costly and ill-conceived restructure and committed millions of pounds spending to an anachronistic ‘Enterprise Hub’, despite the unfolding pandemic and related crises. She employed  an Interim Head of Finance clearly not up to the job, to help her drive through brutal organisational changes in the midst of a pandemic, perhaps because this is the calling card she wanted to leave? Furthermore, she refused to furlough union members who are carers, mostly women, during the peak of the second wave of the pandemic, in what was understood as a retaliation for their union activities.

For all of this she must be held accountable.

It will be for Frances Corner, in her quieter and more reflective moments, to work out why she would want to sabotage the internationally renowned and celebrated institution she is presiding over. We know from other institutions that have attempted centralisation of their student facing services and staff redundancies as strategies for organisational change that these are often unsuccessful and do not deliver the efficiencies they promise.

But there are other ways. Talk about feminism and social justice doesn’t have to be double speak. It is not a failure of leadership to listen and to accept that your original assessment was ‘wrong’, to change the story you tell about the institution you lead, to work with all staff and not against them. What Frances might could do instead:

And if she isn’t willing to do these things, it is perhaps time for her to walk away and leave the people who actually care about the institution and have the right expertise in charge.