Our GUCU branch was represented by two voting delegates, myself, as President, and Mary Claire Halvorson, our Learning rep on the exec.

Both our GUCU motions were passed with friendly amendments. We will include the full text in the minutes to this meeting.

The majority of business was about reports back from the NEC and its various sub-committees. The debates were lively and the contributions were generally good-natured. We heard that USS has gone through a difficult few years and a report by First Actuarial comparing USS with TPS has been produced.

The General Secretary’s report included, falling staff numbers despite the rise in income fees, the tackling of pay inequality, casualization and escalating workloads. A major issue was future approaches to industrial action in the light of past performance. A commission will be set up to look at alternative approaches and a start will be made to make the approach less top-down with more consultation with local branches. One interesting aspect of Congress was the idea of a possible merger with NUT/ATL. Sally hunt gave some background in her speech to congress,

“When UCU was formed in 2007 our aim was to create a union of equal partners.Yet ten years on, our FE membership constitutes just 28% of UCU.

Congress, if we continue losing FE members at the rate we are going, they will account for only around one fifth of our membership by 2022.

Now, I was a strong advocate of the merger. It made industrial sense.

And in that vein I hope that you will join me in wishing our sisters and brothers in NUT and ATL the best of luck as they create the new National Education Union.It is no small task and they will need their friends. Of which we are one.”

The full speech can be accessed here:

Delegates also passed the motion from London Region to Congress to recommend a vote for Labour, which means this is now national policy:

A Tory win in the 8 June general election will be a disaster for workers and public services.

1.    To campaign with a message of Defend Education, defend workers’ rights, no to austerity, racism and war.

2.    To engage our members around this message through all possible means and to take part in campaigning activities on such themes, particularly with Stand Up To Racism.

3.    To encourage branches to hold hustings meetings for candidates (except fascists), if possible alongside other unions and student organisations.

4.    To take part in marches and protests that highlight our areas of concern during the election period—such as marches against the school funding cuts.

5.    While recognising that our union is not affiliated to any political party, to call in this election for a vote for Labour. 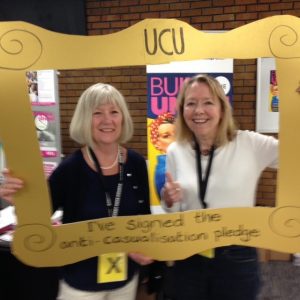