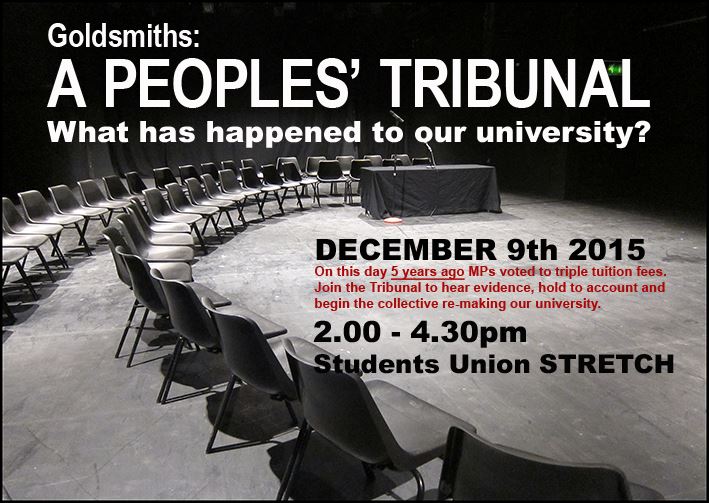 December 9th, 2015 is the 5th anniversary of the vote in the House of Commons on the tripling of University tuition. In the past 5 years both expected and unexpected transformations have occurred in our universities. Debt and marketisation have reached deep not only into how the university is run, but also into our mental health, our relationships with each other, and our ability to work toward another future.

A Tribunal is not a trial. It is a court of the people set up to address injustices that are not recognised by the law. A People’s Tribunal sets out to define what justice is, through gathering testimony and evidence and identifying causes and remedies. Through this process we come to a deeper collective understanding of the drastic changes that have occurred and build our capacity to bring about change.

The Tribunal will hear 5 provocations to begin our cases:
1. Criminalisation: how have protest & students’ bodies become criminalized?

2. Money: how is student fee money spent? why are there so many more managers now? how much is spent on marketing?

3. Governance: who is in charge of Goldsmiths now? Are they accountable?

4. Work & Reproductive Labour: why is everyone so exhausted? why is there so much more invisible work and who is doing it?

5. Anxiety: why is there a mental health crisis? is the demand for more counsellors from the last student occupation a political demand?

Join the Tribunal to hear evidence, hold to account and begin the collective re-making of our University.