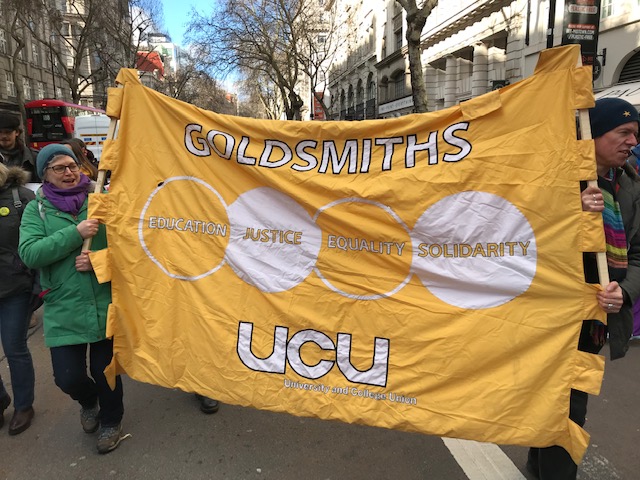 On Monday 8 June you sent an email stating the college’s position on furloughing Associate Lecturers, Graduate Trainee Teachers and Academic staff. Further to the statement given on the 22 May, that the college had decided not to furlough ALs/GTTs because it was ‘not appropriate’, yesterday’s email gave a belated elaboration of SMT’s decision, two days before the final cut-off point for furlough applications. The email states that “The College’s decision to not furlough ALs/GTTs colleagues is not a reflection on their hard work and dedication” but rather “because they are not eligible for the scheme” then proceeds to list a series of reasons, supposedly gleaned from legal advice, that clarify why ALs and GTTs are not eligible for the scheme.

Before explaining why each of the reasons you have provided do not in fact prove the ineligibility of ALs/GTTs, it is necessary first to correct your claims about additional payments due to ALs/GTTs for the hours they worked beyond contract during the lockdown.  You say “This year, ALs/GTTs have provided additional support and where they have done this they’ve been paid for this work” and that “No pay has been withheld from ALs/GTTs.” This is factually inaccurate. At the Joint Negotiating and Consultation Committee (JNCC) on 21 April, HR formally agreed, in accordance with the law, that extra hours worked by ALs/GTTs beyond contracted hours during the lockdown would have to be honoured. HR then committed to communicate these instructions to departments who would let ALs know. Documents provided by the Director of Finance showed that provision has been made in the College budget for these additional payments.  Following this news we encouraged ALs/GTTs to submit pay claims to their departments to recover these additional payments. We were told by numerous ALs/GTTs from various departments across the college that on submitting these claims they were refused t by their departmental business managers (DBMs) because they had in fact not received instructions or guidance from HR. We have email evidence to corroborate this. On a number of occasions after this, UCU reps requested HR to directly email DBMs to instruct them to request these pay claims from ALs/GTTs. Meanwhile ALs/GTTs continued to request additional payments and were again denied by departments. Only on the 29 May, after ALs/GTTs were made aware that they would not be furloughed, did HR email departments to instruct DBMs to issue additional payments. Therefore, for more than a month, pay was indeed withheld from ALs/GTTs and to date these payments have not been honoured for all ALs/GTTs. We expect you will be able to correct the account of events that has been sent to all staff.

Your decision on furloughing is framed around what you call ‘the Government’s guidance on public funding.’ But this is not explained further, which is confusing given the email’s earlier acknowledgement that HE institutions can furlough their staff up to the proportion of funding that they receive from non-public sources. You state:

“Acknowledging that the funding structure of universities is complex, the Government has said that higher education institutions should not expect to furlough a greater proportion of their payroll than they receive from non-public sources. UK and EU tuition fees are counted as ‘public funding’ in this context.”

Given that Goldsmiths has furloughed less than 100 members of staff, we are certain that we have reached nowhere near the level of funding we receive from non-public sources (38-42% of Goldsmiths income). Therefore the public funding issue is not a valid reason for the decision not to furlough casualised staff.

The email then provides 4 reasons (in fact you give 2) why ALs/GTTs are not being furloughed. Notably none of these reasons are evidenced by anything the government has actually stated publicly.

The first and second reason appear to be same:

“AL/GTT colleagues are academic staff and it is not the case that they are unable to carry out their work because of Covid-19.”

“the scheme applies to colleagues who have work they are unable to do for specific reasons related to Covid-19.”In the guidance on the Coronavirus Job Retention Scheme published by the UK government on 14 May there is no mention that an eligible candidate for the scheme must be unable to carry out work because of Covid-19. What the guideline says about fixed term contracts, which is what ALs/GTTs are on, is that:

“An employee on a fixed term contract can be re-employed, furloughed and claimed for if either:

their contract expired on or after 19 March 2020 and an RTI payment submission for the employee was notified to HMRC on or before 19 March 2020 If the employee’s fixed term contract has not already expired, it can be extended, or renewed.”

In fact you reiterated this point in the email you sent out on 23 April requesting applications for the furlough scheme. The first criteria of eligibility that you stipulated there was that: “Staff, whether UK citizens or foreign nationals, who were on Goldsmiths payroll on or before March 19 2020, on any type of employment contract including full-time, part-time, or flexible hours.”

The second reason you give is that “ALs/GTTs who do not have work to do and would not have a contract with the College at this point in the year are not eligible for payment by the College.” This does not align with the quote from the government guidelines above or the following quote from the same guidelines: “If you made employees redundant, or they stopped working for you on or after 19 March 2020, you can re-employ them, put them on furlough and claim for their wages through the scheme from the date on which you furloughed them.” According to these guidelines, if a fixed term contract came to an end on or after 19 March, as indeed many AL/GTT contracts at Goldsmiths did, these employees are eligible for the scheme through contract extensions. The guidelines clearly state that employees on fixed term contracts can have their contracts extended so that they can be furloughed, regardless of whether they would normally expect to work during this period.

The fourth reason given, which again is a variation of the previous reason, is that “extending the contract of staff who would not normally be employed would entail the College picking up the liability for the remaining part of the salary not covered under the Furlough Scheme.” It seems to us that this is closer to the actual reason ALs/GTTs are not being furloughed: that Goldsmiths has decided that it is too costly to pay 20% of their hourly paid wages for up to 4 months. (This marks Goldsmiths out from countless employers across the country). Frustratingly, however, from the beginning of the furlough scheme, there was no onus on employers to actually pay this 20% top up until the May 29 adjustments of the scheme. It is only from September that the employer is required by law to pay 10% of the employees wages.

Crucially, what is missing from your depiction of the nature of AL/GTT contracts is that following the expiry date of their fixed term of employment, ALs/GTTs continue to occupy a term of engagement with their employer such that they are available to carry out marking duties outside of their contractual engagement with the institution. In some cases, ALs/GTTs remain in contracts but the marking takes place about a month after teaching work stops, meaning for the time between the end of teaching and beginning of marking they have no income. But in either case, this continued term of engagement with the institution, under which staff members are expected to be available to the employer to carry out marking duties, does not appear to qualify ALs/GTTs to be considered retainable through the furlough scheme.

In summary, to furlough Associate Lecturers would be well within the ‘exceptional spirit’ of the scheme as defined by the Government and affirmed very clearly by the The Universities Minister, Michelle Donelone on 8 April:

“I know there may be large numbers of staff who are on short-term, casual or hourly paid contracts, as well as those employed by outsourced services. They will of course be anxious about how they will manage financially.

In most circumstances I expect employers will be able to continue paying staff. But where this is not the case, workers can rely on the package of support announced by the chancellor, including the Coronavirus Job Retention Scheme, which will help pay staff wages and keep people in employment.”

We have evidence that hourly paid teaching staff at University of the Arts London have been furloughed, so it is not at all the case that your interpretation of the scheme represents an objective position but in fact simply reflects the current priorities of the majority of university managers in the sector. If Goldsmiths has retained the right as an employer to simply refuse its employees access to these public monies, which indeed it has the right to do, then this is what should have been explained to members of staff.

To admit this however would commit you to explaining your moral justification for furloughing 80 members of Estates staff while refusing to furlough staff members who applied on the basis of childcare responsibilities (an eligibility criteria which you explicitly identify in your 23 April email), refusing access to non-UK staff members for whom the furlough scheme is the only source of public monies available during the lockdown and refusing access to ALs/GTTs while still expecting them to be available to carry out marking duties ahead of mass layoffs.

Given that you have not provided an accurate or comprehensive account of the College’s refusal to use the CJRS for ALs/GTTs, we now call on you to consider additional ways of protecting the employment of casualised members of staff. This could involve, as a first step, revoking the freeze on AL employment for 2020/21 and extending fixed-term contracts in order to ensure that the College is ready for online teaching in October. Furthermore, we ask that you make available the full legal advice from Shoosmiths and any relevant correspondence from UCEA (including the FAQs issued on 30 March) that may help us understand how you reached your decision.