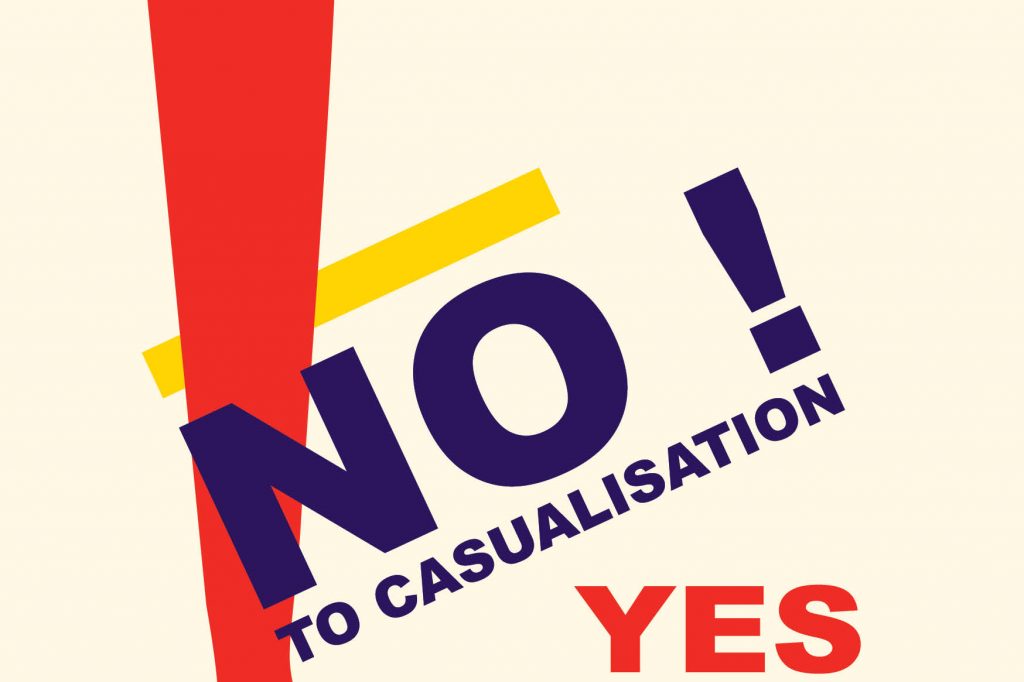 Emergency Meeting Wednesday 20 May 3 – 5 pm open to all casualised academic staff. GUCU anti-casualisation reps will be in attendance. For Zoom link email: goldsmithsjustice4cleaners@gmail.com

This is an update from the anti-casualisation group in response to recent events at Goldsmiths regarding ALs, GTTs, Fixed Term teaching and professional staff and short-course teachers during the Coronavirus lockdown.

From day one of the lockdown at Goldsmiths (23 March) we have been involved in pushing HR and Senior Management to make commitments to the welfare of casualised teaching staff. From the beginning, we have insisted that the college support the most precarious teaching staff during this difficult period. And throughout we have stressed that the university needs to keep casualised staff informed about what is expected of them and what support is available for them.

On all accounts we have been met with a wall of indifference and a complete lack of sympathy for the situation of casualised academics. When we have been able to compel HR to commit to fulfilling its duty of care for staff, this has come after long periods of unresponsiveness to repeated requests. So if this message comes late in the day, now is the time to go public following weeks of careful discussions that have unfortunately  achieved very little tangible progress.

Following the launching of the UK government Coronavirus Job Retention Scheme (CJRS) on 20 March we began exploring the parameters of the scheme as a potential last resort to supporting casualised members of staff facing redundancy during the Covid-19 crisis. We took advice from a number of authoritative sources about this new scheme, including colleagues at Sheffield University who had already established an agreement with their institution’s management to furlough over 1000 members of academic and non-academic casualised staff. With GUCU we formulated a comprehensive outline of the scheme which was sent out by HR Director  Carol Ford to all staff on 23 April inviting applications from staff to volunteer to be furloughed. DBMs have since approached permanent staff members unable to teach due to the lockdown, e.g. lab technicians, technical support staff. Based on Carol Ford’s email, the government guidelines, and our awareness of cases in other institutions, we are confident that the scheme could be used both by permanent staff unable to teach and by casualised staff on fixed term contracts, to avoid them being released into a job market which simply does not exist.

In our understanding of the policy and following good practice from universities including Sheffield and Kings eligible candidates include ALs whose contracts have just finished, ALs still working, Fixed Term contracted staff on contracts ending  in the coming weeks/months, and short course teaching staff whose courses have been cancelled. The scheme is flexible and can be tailored around individual requirements and the amount of money received is a monthly salary calculated from an average of your earnings over the period of your contract. HR formally acknowledged that the scheme could not be used to identify potential redundancies.

At this point we began working with ALs from different departments to draft furloughing proposals for their departments. ALs in the Politics department worked with GUCU, their HoD and the DBM, to request a contract extension due to a delay in submissions and marking, and to be furloughed until mid-June when they would come off to fulfill their marking obligations then be re-furloughed for the remainder of the scheme. This detailed plan was approved by both HoD and the DBM and submitted to HR. Following this we supported ALs from a number of departments (including Visual Cultures, Anthropology and MCCS) who submitted their own applications to HR.

On 7 May GUCU discussed with  HR the applications for furloughing of ALs. HR implied that there was limited capacity for undertaking the work to furlough casualised academics and  there appeared to be a lack of understanding of the detail of the scheme. Frustratingly, HR repeatedly raised the issue of the CJRS was not designed for universities funded by public money, yet this is in spite of HR moving to furlough permanent staff funded in the same way. (Clear advice from the government and UCU HQ updated guidance here confirms that this scheme is relevant to the HE sector and for at least 30% of the wages at Goldsmiths). Additionally, HR indicated that the window for applying for furloughing would be closed by 11 May.

On 12 May the UK government announced that the furlough scheme would be extended until October, since when  GUCU has emailed  HR requesting that they extend their deadline for applications to the scheme. On 14 May, the Sociology HoD received an email from HR explaining in brief that the proposal for furloughing submitted by Sociology ALs would not qualify on the terms of the government scheme. No further explanation was provided.

ALs have drafted an open letter to be sent to the Warden Frances Corner to request that the scheme be used to support all ALs and GTTs to the current end date of the scheme. Please sign this open letter if you have not already.

At the beginning of the lockdown, our initial concern was to ensure that hourly paid staff would be remunerated for the significant amount of additional hours they worked migrating teaching material online and for responding to the lockdown with the utmost professionalism and stamina. At the Joint Negotiating and Consultation Committee (JNCC) on 21 April, HR formally agreed, in accordance with the law, that extra hours worked would have to be honoured. This means that every extra hour you have worked beyond your contracted hours from 23 March should be claimed back from your department. Departments would be told to make these payments and Goldsmiths would make up for any shortfall in departmental budgets. We sought a clear and standardised format for processing these claims, and for this to be communicated to Departmental Business Managers (DBMs) urgently.

However, when staff members  submitted pay claims to their departments, they were told by DBMs that this would not be possible until they had been directly instructed by HR to make these payments. On 29 April, GUCU raised this at the JNCC and were told that the extra budget for the additional payments had been approved by the Goldsmiths Leadership Group (GLG) (a senior governing body involving Senior Management and Heads of Departments) and that DBMs should be honouring the payments. On 7 May GUCU AL reps met with HR for a dedicated meeting about special measures for casual staff, during which another commitment was made by HR to  email all DBMs instructing them to issue payments for additional hours worked during the lockdown. To date (15 May) we have no confirmation of whether this email has been sent.

We strongly advise all hourly paid teaching staff to calculate additional hours worked from 23 March and to submit a pay claim form (attached) to their department citing HR’s formal agreement above. The following additional tasks should be considered in calculating additional administrative hours to be added to hourly paid contracts:

On  7 May HR announced that all new AL contracts would be frozen for the 2020/21 teaching year as a cost-cutting measure to mitigate against the damage caused by the Covid-19 crisis. This means that between April and December 309 AL contracts and 163 Fixed term contracts (many of which had a realistic expectation of renewal) will come to an end and will not be renewed. This means that roughly 62% of all ALs may be laid-off. Departments have yet to inform staff members whether they will be retained for the next teaching year and there does not appear to be a formal process in place to decide who will be kept on.

We are absolutely devastated by this news and angered that ALs and GTTs are paying for the crisis, even though we are paid the least, even though we are the most precariously employed, even though we have held the institution together for years on our discounted expertise, even though we responded to the lockdown with the utmost professionalism and stamina, learned how to work systems we’ve never been trained to use, offered support and guidance on behalf of the institution to distressed students, carried out excessive amounts of work without pressuring our departmental staff for remuneration. We are enraged that HR considers hourly paid lecturers to be so disposable that using them to absorb the shock of the crisis while making no effort to draw on the available support measures that have been specifically designed for this workforce (e.g. the CJRS furlough scheme) causes them no qualms whatsoever.

We need to organise ourselves urgently to respond to this assault on our livelihoods, this disregard for our wellbeing and frankly this attack on the future of Goldsmiths. We need to prepare ourselves for the real likelihood of a mass lay-off of hourly paid teachers, and to explore the leverage we might have in resisting this. We have the full support of our union and permanent colleagues have voiced deep concerns about the workload issues that will result from our removal. So this is a struggle we share with teaching staff across the college.

To plan how we should respond to the situation outlined above please join us on Wednesday 20 May 3 – 5 pm for an emergency Zoom meeting open to all casualised academic staff. GUCU anti-casualisation reps will be in attendance to field questions and give further updates.