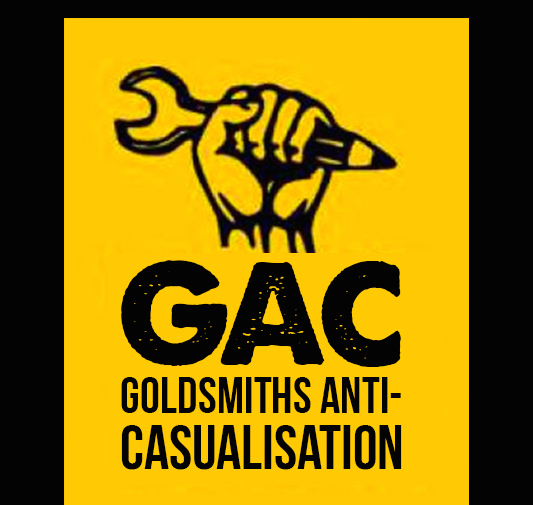 The first anti-casualisation meeting which is open to all ALs/GTTs from all departments will take place on Wednesday 24th October – 12-1pm DTH (Deptford Town Hall) 109, please join us.

We will begin by outlining the scope of the assimilation of Teaching and Scholarship positions (GTTs/ALs) to the 2008 Agreement on Modernisation of Pay Structures. In 2008 it was agreed between GUCU and Goldsmiths management that temporary fixed term contracts would be brought in line with this Framework. The content of this agreement can be found here. This meant specifically the introduction of a single pay spine across all academic roles and a harmonisation of terms and conditions across departments. The assimilation of hourly paid Teaching and Scholarship role profile (GTTs/ALs) to the Framework Agreement was implemented in the 2013/14 academic year.

A working group involving Annie and I and a number of other GUCU members has been set up, on the invitation of the head of HR Andy Lamb, to overview the operationalisation of this assimilation which is long overdue. Carrying on from the anti-casualisation meetings last year led by Neda and Mijke we would like to re-establish a number of small groups to work on issues regarding casual contracts and the actual working conditions of temporary hourly paid academic staff to bring forward in this working group. Last year we began to get a fairly clear picture that there are some significant discrepancies between contracts across different departments. Some staff are being paid for certain teaching activities (lecture attendance, administration, preparation etc.) while others are not. This issue bears directly upon the aims of the assimilation and so could be dealt with relatively easily if we had a large enough pool of ALs from different departments to compare contracts and harmonise them with the best contractual terms (which I believe is Media and Comms). Please bring along your contract (the spreadsheet part) so we can start on this work.

Along with this, we would also like to look at assessment marking and feedback for hourly paid staff. A recurring complaint among ALs and GTTs last year was that the time allocated to marking assessments completely misrepresents the actual time it takes to provide good feedback to students, an issue which students themselves are particularly sensitive to. As such, it has become normal practice for hourly paid staff to contribute a fairly substantial amount of free labour every time they mark scripts. This is again something that bears on the assimilation agreement that we reckon we can manage to adjust with very little kick-back.

In the longer term and paralleling the UCU ballot on pay and diversity, it is our aim to put the experience of casual staff right at the centre of discussions to do with the neoliberalisation of HE. In order to do this we think one of the main areas of work that has to be done on this is consciousness raising, not only among ourselves, but also among our colleagues on permanent staff, around what it is to be a hourly paid member of academic staff in HE today. We also think it is important that we think of ways of evidencing how the material constraints of this seemingly normalised rite of passage is creating devastating barriers in terms of diversity in HE. One idea of how to do this is to collect and publish testimonies from ALs (which can be anonymous if desired) to lay out the financial and personal strain of working precarious teaching jobs alongside other part-time work and other life commitments. The use of testimonies was a really powerful way to raise awareness of working conditions in the recent Justice For Cleaners campaign. If anyone feels willing to do this, please get in touch and/or we can discuss this further in the meeting.

The Fractionals For Fair Play (FFFP) campaign group at SOAS is a good model to look at for how we might approach something like this. They conducted a fairly comprehensive survey among fractional staff which can be found here. Also Notes from Below did a good podcast with those involved in the FFFP campaign if you want to find out more. Some further recommended reading co-authored by former GUCU hourly-paid rep Jamie Woodcock which explains some of the structural issues which shaped the recent USS strikes can be found here.

There is much to discuss and we are enthusiastic to hear specific areas of concern within particular departments and individual cases.

Look forward to seeing you all.