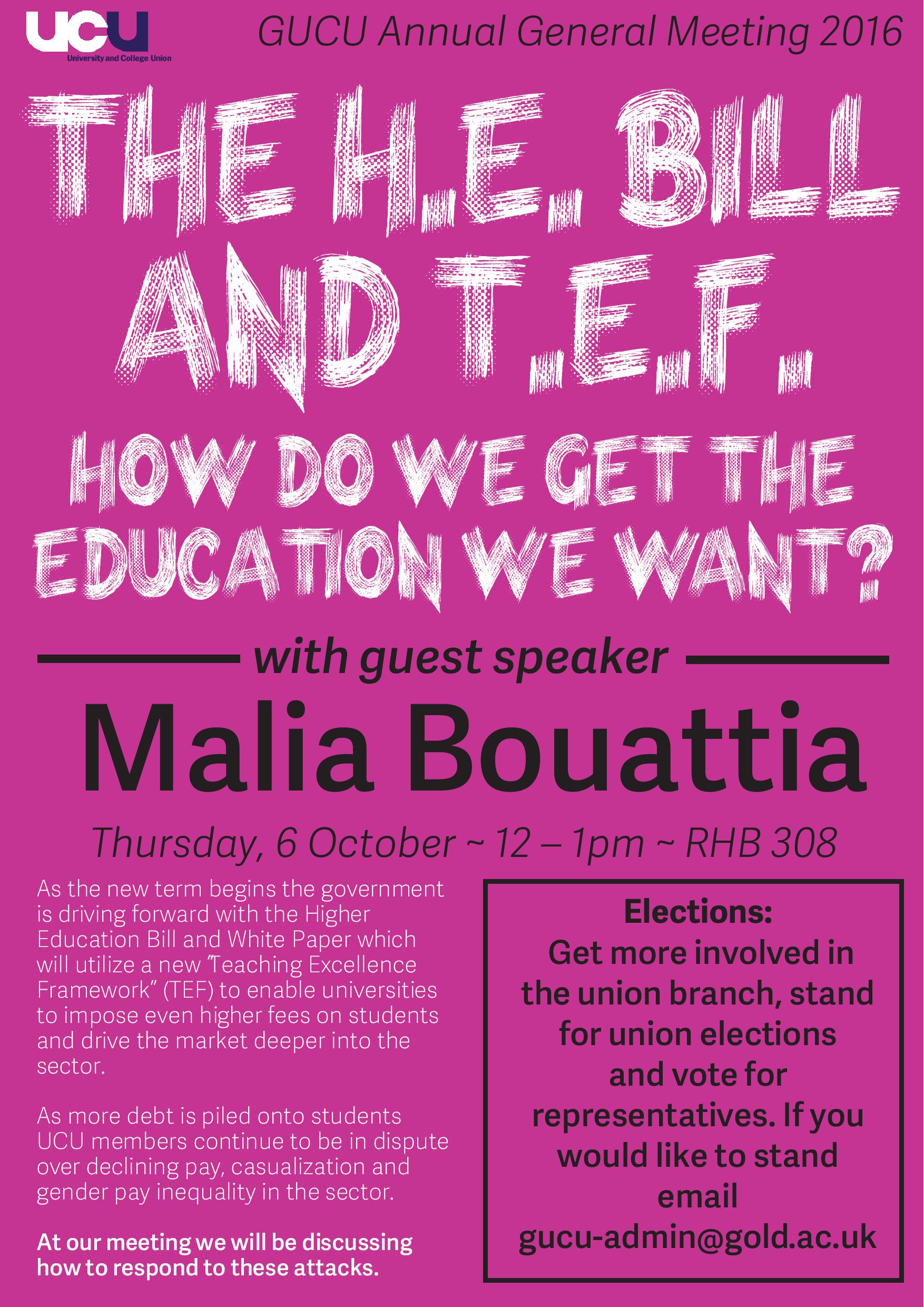 The Higher Education Bill and TEF: How can we fight for the education we want?

Newly elected NUS President Malia Bouattia will be attending our GUCU annual general meeting as guest speaker to discuss the HE Bill, TEF and the fight for education.

This meeting takes place at a critical time in the future of our sector. It will also be an opportunity to:

Critical times for the education sector

*As the new term begins the government is driving forward with the Higher Education Bill and White Paper which will utilize a new “Teaching Excellence Framework” (TEF) to enable universities to impose even higher fees on students and drive the market deeper into the sector. As a consequence many universities have already announced their intention to increase fees for next years intake, and some for current students. It at committee stage now and expected to return to parliament for a vote later this term.

*In the last few months the government have already scrapped maintenance grants /NHS bursaries and changed student loan repayment terms. As more debt is piled onto students UCU members continue to be in dispute over declining pay, casualization and gender pay inequality in the sector. Following last terms action, UCEA, the national employer representatives, have not improved their final offer of 1.1% on pay. (UCU update here: http://www.ucu.org.uk/circ/pdf/UCUBANHE3.pdf)

*Pay Goldsmiths representatives will be attending a London wide consultation on where next for the dispute, including a potential marking boycott, further strike action & working to contract. We will be discussing this and deciding a way forward.

Opposition to TEF Both UCU and NUS are committed to building opposition to TEF with student unions preparing for a boycott or sabotage of NSS in the spring term aimed at disrupting metrics for measuring TEF.

The Gold Paper At Goldsmiths staff and students have been working on developing concrete alternatives to the market model at a local level – from governance to finance: https://goldsmithsucu.wordpress.com/2016/04/11/the-gold-paper/

The Gold Paper was presented to Council last week and in the coming weeks department meetings will be organized to bring staff and students together to discuss what issues people want to prioritise and how we can build momentum around them. Copies of the Gold Paper are also available – contact gucu-admin@gold.ac.uk if you would like some.

Tackling Workload GUCU will also be launching a survey on workload for all staff following widespread concerns about increased workload and stress.

Would you like to get more involved in the union?

If you would be interested in getting involved with any of these issues – we want to hear from you! At the AGM all positions in the branch will be up for re-election  (see current positions here). Whether it’s working on equalities, becoming a department rep, or tackling casualization – please get in touch with Hannah by email gucu-admin@gold.ac.uk. and let us know, or ask for more info.

You can also put yourself forward on the day at the meeting. Open to all UCU members – If you are not already a member – Join us! https://join.ucu.org