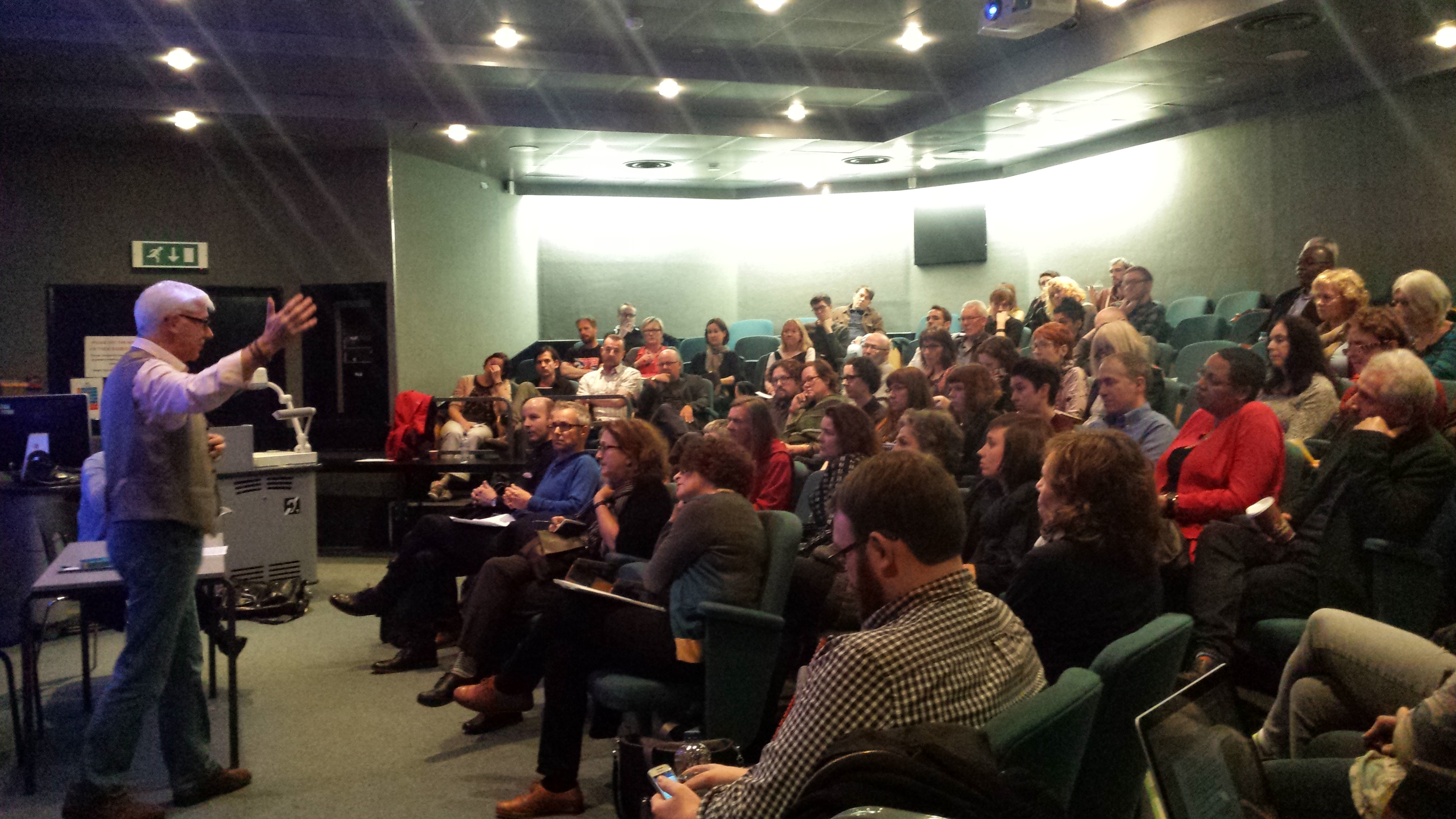 Thanks to the 100 staff and students who came to GUCU’s Reclaiming Our University conference on Monday: the first in a series of events and initiatives to discuss and address the current challenges facing us in the Higher Education sector and Goldsmiths.

The event was opened by Thomas Docherty author of Universities at War who placed the day’s discussion in historical context; examining the rise of managerialism and intense competition that has come to afflict our institutions. You can listen to his analysis and proposals for developing an effective movement for education on SoundCloud.

In Sustaining Goldsmiths panelists Johnna Montgomerie, Jamie Green and Sukhdev Johal discussed the myths and realities of the “deficit narrative” from the global economic crisis to Higher Education to Goldsmiths itself. There was a strong emphasis on the need to develop strong, evidence based, counter narratives to the “deficit narrative” as part of campaigning efforts against cuts and in defence of education as public -not market – asset.

In the Workshops we looked at workload, casualization and bullying. The discussions will form the basis of proposals for tackling these issues to be discussed further at GUCU branch this coming Thursday 11 June 1pm-2pm – with more detail to follow.

In the final session GUCU President Tom Henri underlined the importance of building and strengthening the union – particularly at a time when the right to organise and strike is coming under attack. GSU Welfare & Diversity officer Bahar Mustafa discussed the importance of staff and students working together to mobilise for an education that is enriching for the whole community, and for a diverse curriculum which represents the experiences particularly of BME, women, disabled and LGBTQ+ students.

We also heard from Paul Cooper UCU Committee member at Lewisham and Southwark College facing 200 plus job cuts and the closure of the Camberwell site. Following from Thursday’s strike action, this is a vital part of the struggle to defend Further Education from massive cuts and we strongly encourage people to support the dispute: https://www.facebook.com/pages/Defend-Lewisham-Southwark-College/170859336428263?fref=ts

Sue Kelly also announced a Goldsmiths: A People’s tribunal a project open to Goldsmiths staff and students which will seek to come deeper collective understanding of the drastic, yet often subtle changes that have occurred in our university in the last 5 years, culminating in events to mark the anniversary of the tripling of fees in 2010. An initial meeting to discuss this will take place Tues June 16, 1pm, RHB 138.

If you attended the day or have followed the discussions and have any feedback from the day or suggestions or proposals about the issues discussed please email us on gucu-admin@gold.ac.uk

Join the UCU or ask a colleague? If you enjoyed the day and are not yet a union – consider joining us: http://www.ucu.org.uk/index.cfm?articleid=2283

Already a member? If you are already a union member there are many ways you can get more involved. There is also training offered by the union in a range of areas from case work and representation to equality issues, see: http://www.ucu.org.uk/4797 . Please get in touch.

-Discussion of Reclaiming our University conference and follow through