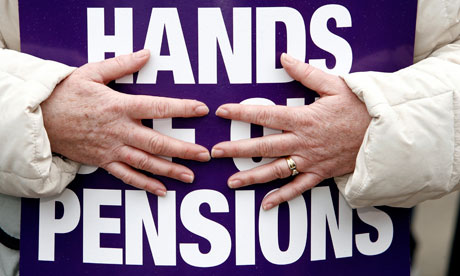 By now you will have heard that the USS fund is at least £7bn in deficit.  The employers and the pensions regulator are going to use this astronomical sum to do away with your final salary pension.  This figure of £7bn is magical accounting – the USS fund is highly solvent (see Dennis Leech’s blog for more on this http://blogs.warwick.ac.uk/dennisleech/entry/uss_is_highly/).  This attack on your pension is both ideological and unnecessary.

What does this mean for you?

Let’s assume that you live for 17 years beyond retirement.  If the changes to the pension benefits the employers are trying to implement become reality then:

We have to act fast. The employers intend to have the new benefits structure in place by March 2015.

We will need a HUGE campaign to defend our pension entitlements and we encourage you to vote YES to strike action and action short of a strike in the upcoming ballot (1st to 20th October).

If UCU negotiators can go to the employers with the knowledge that they have a mandate from the membership for industrial action and a dynamic campaign – we have a much greater chance of saving our pensions.

Also, it’s worth having a close read of the article about the upcoming dispute on the time higher website http://www.timeshighereducation.co.uk/news/uss-reforms-seen-as-radical-attack-on-pensions/2015786.article ​ – particularly the bit about previously accrued benefits. This is going to get messy!​

More details of the ballot can be found at http://www.ucu.org.uk/circ/pdf/UCUHE230.pdf

The exec recommend voting YES to taking action on this urgent issue.