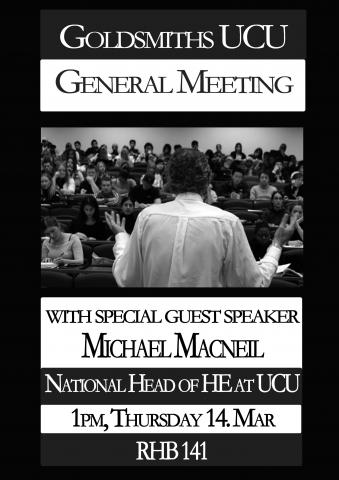 The next General Meeting will take place on Thursday 14. Mar in RHB 141, at 1pm.

It is really important we have a good turn-out for this meeting, particularly as Michael MacNeill, head of Higher Education at UCU, will be attending as a guest speaker.

This will also be our opportunity to vote on motions for UCU congress. The two motions that have been proposed by members at Goldsmiths are given below:

1. Motion to support the People’s Assembly against Austerity

That the government has introduced the most far-reaching programme of cuts and austerity for 90 years. We have seen pay cuts across the public sector, the marketisation of the NHS and swingeing cuts in welfare, public services and housing including, most recently, the ‘bedroom tax’ – all of which will hit the poorest section of the population the hardest.

That, in opposition to the government’s austerity programme, a number of unions and anti-cuts organisations have supported the call for a People’s Assembly against Austerity that aspires to build a movement for social justice and develop a strategy for resistance to the cuts.

That the assembly will provide a national forum to develop links between unions, community-based campaigns and anti-cuts groups to build the confidence and organisation of all those opposed to austerity.

To support the call for the People’s Assembly at Central Hall Westminster on Saturday 22 June 2013 and to send 5 delegates.

2. Motion against the Threat to Education Departments in HE

– The drastic cut in ITE places in universities as a result of government policy to sever links between HE Education departments and schools, despite evidence that HEI-led partnerships offer the most effective route into teaching.
– The threat of significant redundancies in HE Education departments and wider consequences for HEIs.
– The deprofessionalisation of teachers and teacher educators that results from the government’s view of teaching as a craft.

– Conduct a national audit of branches to find out the effect of cuts in numbers on staff, courses and research in Education departments and across universities;
– Launch a campaign on the defence of Education departments with immediate effect;
– Urgently organise a dialogue with other education unions on this policy and formulate and publicise a joint position and campaign strategy;
– Widely publicise a critical analysis of government policy on ITE.

Please do save the date and keep other members informed, as this will be a very important meeting and without a quorum we will not be able to make progress on key issues.